Homepage > ...In a Van Down by the Ocean: A Homeless Memoir

...In a Van Down by the Ocean: A Homeless Memoir 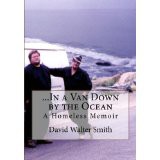 So why have I been reduced to living in a van down by the ocean; playing music on the streets for the last six years? It could be that I’m delusional about my talent. I’ve documented everything: The daughter I left behind to the bewitching Raven who fell in love with a crooning pauper despite her wiser intentions; my fierce dedication toward the craft at hand to a ceaseless self-destructive nature; and from a large, loving, Chicago family to the fettered flock of disenfranchised, damaged, homeless souls who have come to these same  western shores to surrender. I survived the 9-to-5 world for 36 years; I’m done, and willing to live void  of life’s simplest comforts, and ultimately without my Whale-of-a-Great-White-Buffalo-Faithful-Ford-Van, hoping my daughter might see all I have done as the best that I could do.

David Walter Smith was born the youngest of six on Chicago’s northwest side. Being, predominantly, a product of the 70s where guitar was a religion, David built his life around music and words. In his 46 years he has written countless songs and poetry, two novels, and a second memoir.